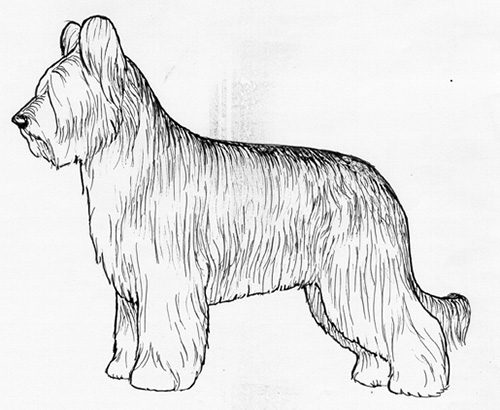 The goals and purposes of this breed standard include: to furnish guidelines for breeders who wish to maintain the quality of their breed and to improve it; to advance this breed to a state of similarity throughout the world; and to act as a guide for judges.

Any departure from the following should be considered a fault, and the seriousness with which the fault should be regarded should be in exact proportion to its degree and its effect upon the health and welfare of the dog and on the dog’s ability to perform its traditional work.

The Briard, known as the Chien Berger de Brie in France, the breed’s country of origin, is thought to be the most ancient of the Continental Herding Breeds. Its history has been traced as far back as the twelfth century.

The Briard was recognized by the United Kennel Club in 1948.

The Briard is vigorous, alert and powerful; balanced and strong in muscle and bone, without coarseness, which allows him to exhibit the strength and agility characteristic of herding dogs. Dogs lacking these qualities are to be penalized to the degree from which they deviate from the ideal.

In males, the length of the body, measured from the point of the shoulder to the point of the buttocks, is equal to or slightly more than his height at the withers. The female may be a little longer.

The Briard is endowed with spirit and initiative; exhibiting wisdom and fearlessness. He is intelligent, easily trained, faithful, gentle and obedient. The breed possesses an excellent memory and an ardent desire to please his master, retaining a high degree of ancestral instinct to guard home and master. Although reserved with strangers; he is loving and loyal to those he knows; some will display a certain independence.

The Briard’s head gives the impression of length and sufficient width without being cumbersome. The preferred head length, measured from the occiput to the tip of the nose, is about 40% of the height of the dog, measured at the withers. A slightly longer head is acceptable. The head joins the neck at a right angle and is held proudly alert.

When viewed from the front, in profile, or from above, the fully-coated silhouette appears to be two rectangular forms (equal in length, but differing in height and width), blending together rather abruptly. The larger rectangle is the skull, and the other forms the muzzle.

The width of the skull is slightly less than the length of the skull measured from the occiput to the stop. The occiput is prominent. The forehead is very slightly rounded. These traits are not well-defined in the fully coated head.

The muzzle, with mustache and beard, is somewhat wide, and terminates in a right angle. The topline of the muzzle is parallel to the topline of the skull, and the junction of the two forms a well-marked stop, which is midway between the occiput and the tip of the nose and on a level with the eyes.

The lips are of medium thickness, are firm of line and fit neatly, without folds or flews at the corners. The lips are black.

The head is well-covered with hair, which lies down, forming a natural part in the center. The eyebrows arch up and out in a curve that lightly veils the eyes. The hair is never so abundant that it masks the form of the head or completely covers the eyes.

Serious Faults: Narrow or pointed muzzle. Excess flesh on the side of the head or under the eyes or temples.

A full complement of strong, white teeth meet in a scissors bite.

The large, well-opened eyes are set well apart; the inner and outer corners being on the same level. The eyes are black or black-brown, with very dark pigment color on the rims of the eyelids, whatever the coat color. The expression is calm, frank and confident.

The nose is square, rather than round, with well opened nostrils. It is always black.

Disqualification: Nose any color other than black.

The ears are attached high, are firm at the base and have thick leather. They may be left natural or cropped.

The strongly muscled, well constructed neck is of good length and is distinct from the shoulders.

The shoulder blades are long and sloping, forming a 45-degree angle with the horizontal. They are firmly attached by strong muscles and blend smoothly with the withers.

The forelegs are powerfully muscled, with strong bone. When viewed from the front, the legs are straight and parallel to the median line of the body, and are never turned inward or outward. The distance between the front legs is equal to the distance between the rear legs. The leg structure is of utmost importance, as they determine the dog’s ability to work and resistance to fatigue. When viewed from the side, the forelegs are vertical, except for the pasterns, which are very slightly inclined. Dewclaws on the forelegs may or may not be removed.

The chest is broad and deep. The ribs are moderately curved. The breastbone is moderately advanced in front and the brisket descends smoothly to the level of the elbows. The abdomen is moderately drawn up.

The Briard is constructed with a very slight incline downward from the prominent withers to the back, which is straight, to the broad loin and the well-muscled croup, which is slightly sloped to give a well-rounded finish. The topline is strong, never swayed or roached.

The powerful hindquarters provide flexible, almost tireless movement. The pelvis slopes at a 30-degree angle from the horizontal, and forms a right angle with the femur.

The legs are powerfully muscled, with strong bone. Viewed from the side, the hind legs are well-angulated, with the rear pasterns slightly inclined. The hock makes a well-marked angle.
Two dewclaws are required on each rear leg. They are placed low on the leg, giving a wide base to the foot. The nail may occasionally break off completely, but the dog is not penalized for the missing nail as long as the digit is intact and present. Ideally, the dewclaws form additional functioning toes.

The feet are strong and rounded, being slightly oval in shape. The nails are always black and hard. The well-developed pads are elastic, compact and covered with strong tissue. The toes are strong, well-arched and compact.

A full length, well-feathered tail is carried low in repose. It forms a crook at the end which does not deviate to the right or left. At rest, the bone of the tail falls to the joint of the hock, ending a crook, which is similar to the letter “J” when viewed from the side. While gaiting, the tail is raised in a harmonious curve, never going above the level of the back, except for the crook at the end.

The Briard has a double coat that shows the sheen of good health. The outer coat is coarse, hard and dry and lies flat, failing naturally in long, slightly wavy locks. The hair on the shoulders is generally six inches or more in length. The undercoat is fine and tight all over the body.

All uniform colors, except white, are permitted. These include black, various shades of gray, and various shades of tawny. The deeper shades of each color are the preferred. Combinations of two of these colors are permitted provided there are no marked spots, and that the transition from one color to the other is gradual and symmetrical.

The only permissible white allowed are those white hairs scattered throughout the coat, or a white spot on the chest which does not exceed one inch in diameter at the root of the hair.

Disqualifications: White coat. Spotted coat. White spot on the chest exceeding one inch in diameter at the root of the hair.

Height is measured at the withers.

The well-constructed Briard has the ability to make abrupt turns, springing starts and sudden stops, all of which are required of a working sheepdog. His gait is supple and light, resembling that of a feline. The gait gives the impression that the dog is gliding along without touching the ground. Strong, flexible movement is essential to the sheepdog.

The Briard’s usual speed is a trot. The dog single tracks as speed increases. He will gallop if increased speed is necessitated to accomplish his work.

(An Eliminating Fault is a Fault serious enough that it eliminates the dog from obtaining any awards in a conformation event.)
All dogs and bitches under the minimum size limits.

(A dog with a Disqualification must not be considered for placement in a conformation event, and must be reported to UKC.)
Unilateral or bilateral cryptorchid.
Viciousness or extreme shyness.
Nose any other color than black.
Yellow eyes.
Spotted eyes.
Tail nonexistent or docked.
Fewer than two dewclaws on each rear leg.
Albinism.
White coat.
Spotted coat.
White spot on the chest exceeding one inch in diameter at the root of the hair.